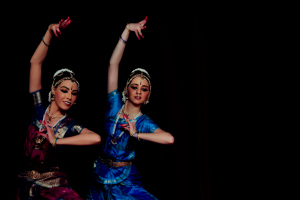 We have both been interested in dance and in India from an early age. The two interests met in 2003, when we started to learn Bharatanatyam under the guidance of Tímea Kiss, our first guru. We were learning dance from Tímea for 6 years in Szeged.

In Budapest, we continued our studies as disciples of Ildikó Gulyás. With the support of Ildikó, we were awarded an ICCR scholarship in 2010 and we could spend the academic year 2010-2011 in Chennai (India), the cradle of Bharatanatyam. There we had the chance to learn from the famous Pandanallur guru, Smt. Meenakshi Chitharanjan. Having followed a rigorous training since September 2010, we had the opportunity to participate in a group performance in February 2011 and to perform our arangetram at the end of the year. We also tried ourselves in carnatic music under the guidance of Smt. Randhini Arwind.